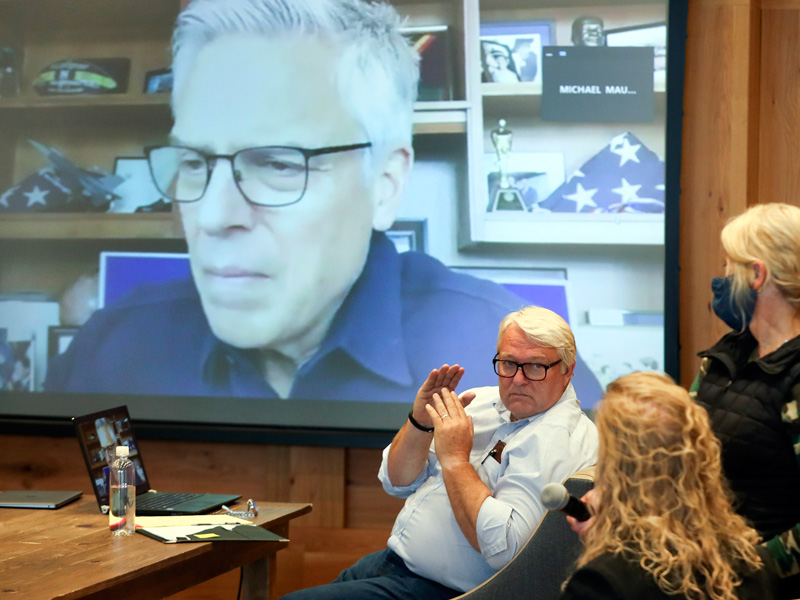 ALTA — Catastrophic wildfires, avalanches, mudslides and congested roadways are threats to some of the Wasatch canyons that have dogged them for decades, with no immediate solution in sight.

A coalition of community organizations and concerned residents met at Alta Ski Area Monday to voice their concerns about years of studies that have not brought about any sort of concrete fix.

Vaughn Cox, chairman of the Granite Community Council, said the layers upon layers of competing jurisdictional oversight have stonewalled finding real solutions, and the frustration among many of the players is growing.

The Wasatch canyons are at a high, even extreme risk of catastrophic wildfires, and three of those canyons — Millcreek, Little Cottonwood and Big Cottonwood — have only one way in and one way out.

Little Cottonwood Canyon has the highest level of avalanche risk in North America.

There are so many visitors to ski resorts, parking capacity is quickly reached and motorists are parking on the side of the narrow roadways, creating dangerous conditions.

City, county and Forest Service plans, including those that address the watershed and wildfire mitigation, have not been updated in years, if not decades.

Laurie Stringham, who serves on the board of the Utah Parks and Recreation, said current government strategies for people to shelter in place in the event of a disaster are inadequate.

She said her sister live near Paradise, California, which in 2018 was overwhelmed by fire that razed nearly every structure and killed 85 people. Her brother-in-law is a highway patrolman in California called to assist and was helpless in getting people to safety because the plans in place didn’t work.

“When they called for the evacuation of Paradise, there were many elderly people who didn’t, or couldn’t leave their homes,” she said. “You cannot safely get out of the canyon if there is a fire at the bottom of the canyon.”

Lisa Bagley said she watched as a wildfire came dangerously close to her parents’ cabin earlier this year near Midway.

“It was fabulous firefighters, prayers and wind that saved my cabin,” she said.

Bagley lives near the mouth of Millcreek Canyon, which is frequented by Scouting troops and families.

“There is only one way in and one way out. If there were a fire like Paradise it would be devastating. ... Fire doesn’t care about politics ... and those 8-year-old little legs won’t be able to outrun the fire.”

Dea Theodore, a biologist, said she lives downstream from the canyons that provide pristine drinking water for thousands of people in the valley. Her concern, she added, is legacy contamination to waterways from mining and tailings that still need to be remediated to ensure that safe drinking water sources continue.

Plans to build a “connect” of some sort between Little Cottonwood and Big Cottonwood canyons have also altered and Alta Ski Area’s desire to put in additional parking is at a standstill.

The resort owns Grizzly Gulch, an area that provides backcountry skiers a place to recreate and also access public land for more recreation. Any connection to Big Cottonwood Canyon would have to happen there, and Mike Maughan, head of the resort, said conflict with backcountry organizations and other special interest groups has thwarted those efforts.

Jamie Kent, past president of the Wasatch Backcountry Alliance, said there is limited space in the Wasatch canyons, but there still should be enough access to go around.

While ski resorts must be able to thrive, so must the backcountry, he said. “We don’t need to eliminate one to preserve the other.”

Kent urged the pursuit of a thoughtful state program to help preserve private property, with willing sellers, so the land is protected in perpetuity.

He told Maughan he wants to continue to work with him to arrive at solutions, but added the time for additional studies is over.

“I could just not do another process that spends a lot of money,” he said.

Salt Lake County is in the process of updating its general plan for the canyons, but multiple residents opposed to its provisions successfully persuaded council members to delay a vote so some of these issues might be addressed.

Huntsman told the participants that the problems in the canyons have been begging to be addressed for years.

“This is going to be one of the most important yet challenging questions we face in this state, and by extension the world,” he said. He added people need to be on top of the problems, or it will be a “disaster.”

“These are our jewels, are lasting legacies. ... We need to make sure what we package up and send onto the next generation is something they can use and enjoy,” he said.