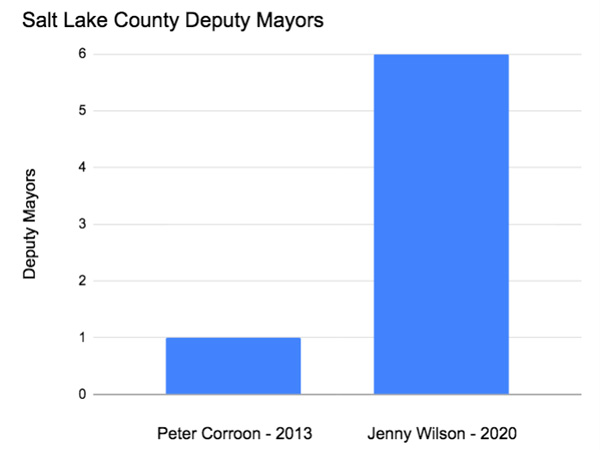 A few months ago, a reporter with the Salt Lake Tribune interviewed me regarding my race to represent the people of Salt Lake County, District 6.

In my interview, I highlighted the concerning fact that Mayor Jenny Wilson now has 6 – 8 Deputy Mayors, with one Deputy Mayor alone receiving an annual pay package of $276,115.11. Shortly after the interview, the reporter sent an email to me, stating she contacted Mayor Wilson’s office and was told by the Mayor's office she has only 3 Deputy Mayors.

I responded to the reporter with the following:

My position is: Salt Lake County's Mayor's office has too many over-paid staff, particularly the Deputy and Associate Deputy Mayors. When Deputy Mayors are making nearly a quarter-million dollars and almost $300,000.00 per year pay package, they have exceeded being public servants. We have entered the area of public employees making more than the Governor, becoming millionaires on the backs of the taxpayers. When the median (household) income for Salt Lake County residents is $73,801.00, excessive numbers of Deputy and Associate Deputy Mayors in these pay brackets are offensive, bloated, and out of control. https://transparent.utah.gov/

I would love to hear from you regarding this important issue! Sincerely,